On the fifteenth day of December, we opened an ale and imperial stout.

My boyfriend opened the Yeti Imperial Stout, which is brewed by Great Divide Brewing Company out of Denver, Colorado.  This came out of a gift set box that I found at the Craft Beer Cellar.  It is a stout aged in whiskey barrels, and with this being part of a barrel aged series, I figured it would be a pretty good beer.  When the beer was poured into the glass, my boyfriend made the comment that it must be good because it was pouring like motor oil.  The smell of it was pretty good as well.  The taste though unfortunately didn’t knock us off our feet… At 12.5% ABV, this is a beer that we say is OK, but not one of the best barrel-aged ones that we’ve had in the past. 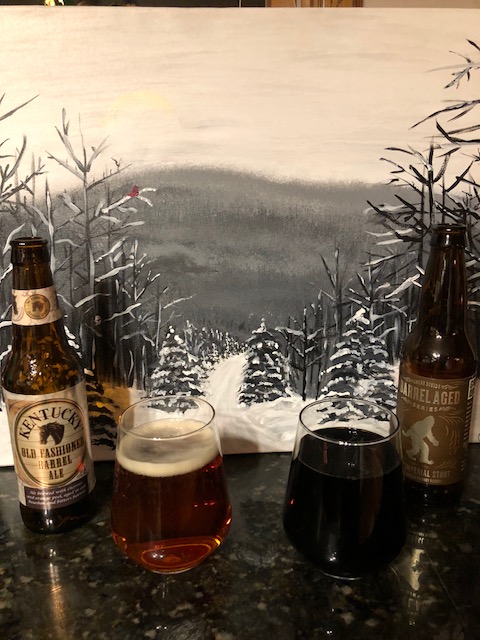 My beer is one that my boyfriend has had already this month.  This Old Fashioned Barrel Ale is brewed by Alltech’s Lexington Brewing Company out of Lexington, Kentucky.  This ale is brewed with cherries and orange peel, aged in oak bourbon and bitters barrels.  You can’t really taste the cherries or orange peel, but the taste of this ale is very smooth.  At 10% ABV, this is definitely a beer that we would pick up at the store if we saw it again.