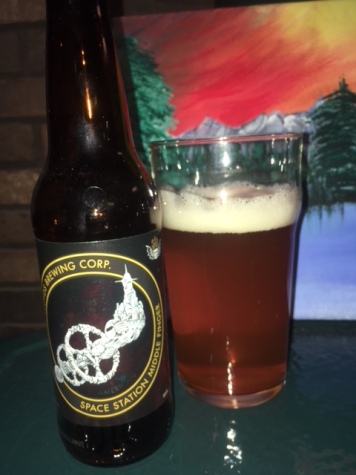 The other night I had Chocolate Milk Stout and this time Josh ended up getting it.  As mentioned before, this is by 4Hands Brewing and is one of our favorites.  Definitely has that chocolate milk flavor!

The Space Station Middle Finger is an American Pale Ale.  When you smell it, you would think it was an IPA.  It has that IPA taste as well, but not too bitter… so it is drinkable.  This is a beer that Kristen had given to me as a birthday gift.

Kristen’s shot was Pecan Pie Vodka and since I have tried that one before, it is a good one and does has a pecan flavor to it.  It’s definitely one that could go into a pecan pie…